I confess to having been a little excited when I heard about Spray.bike, a new formulation of spray paint created in association with Brick Lane Bikes. The first I saw of it was in this BikeRadar article, which didn’t show a particularly inspiring result but did at least give the impression that you could take a tatty old frame and—with no preparation—at least get the stuff to adhere, and maybe even look presentable, with a single coat. That’s quite a leap forward from traditional rattlecans, which demand extensive prep, careful application and multiple layers in order to produce a decent result. I started that process once, before abandoning it and sending the frame to some professionals instead.

So, with a daughter refusing to ride a hand-me-down balance bike because it wasn’t pink, I figured I had a handy chance to test the stuff out before attempting one of my own frames.

The testbed for the new paint was a Ridgeback Scoot. It had been heavily used for a year or so, about four years back, and has since been hung up in the garage doing nothing. The frameset was actually in rather better condition than the wheels, but it still had a load of chips and scratches in it. 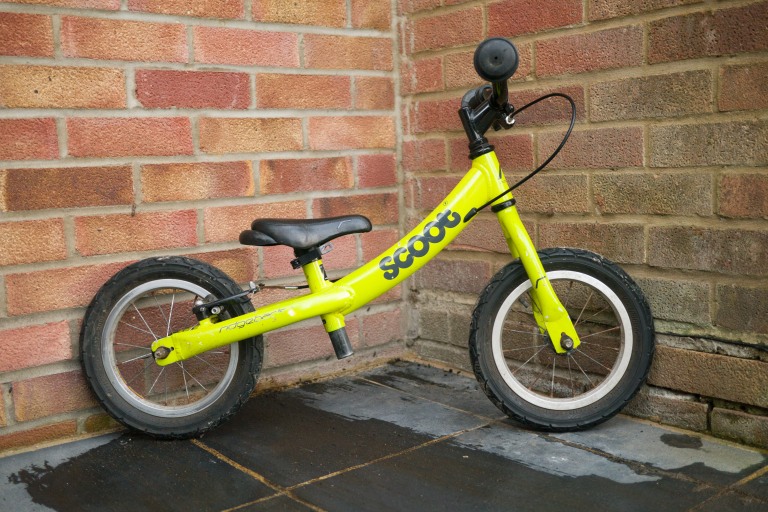 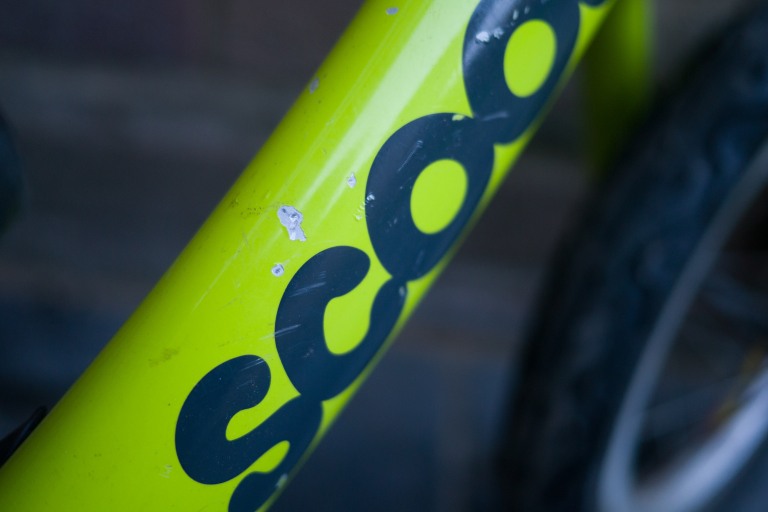 I chose “Quasar” (named after the Raleigh bike) for this job. It looked like a raspberryish colour in the online samples, and I wanted something a little less bright than the fluorescent colours.

Obviously, the first job was to strip everything down (including the crown race, which I only remembered to remove after taking this picture).

The next was to wipe off any muck with a damp cloth and then wipe it dry. After that: roughing up the surface a bit, also known as keying. (Spray.bike claims to be usable straight onto paint, but keying before painting should always give a more durable result.)

Now, I’d best state something up front here: I’d intended to test the product’s tolerance to rough surfaces in order to see how little prep I could get away with on later frames. Bear that in mind when I say that, not having any sandpaper to hand, I used a Bosch “mouse” type sander to rough up the existing paint. We’ll come back to that later.

All that was left was to mask off the brake bosses and steerer tube, and use some paper to mask the insides of the head and seat tubes (no bottom bracket shell on a balance bike, of course), and it was time to get the paint out.

Next job was to actually get painting. The spray is sensitive to the distance at which you spray it: “5-12cm” says the online guide; too close and it’ll just run, too far and it becomes powder and won’t apply properly. As I understand it, it’s effectively a dry powder coat delivered in an acetone base. The smell took me back 25 years to many happy hours spent in the art rooms at school. Ah, lovely solvents. (Not that I was actively inhaling the stuff, I should add, but the air was frequently thick with it.) 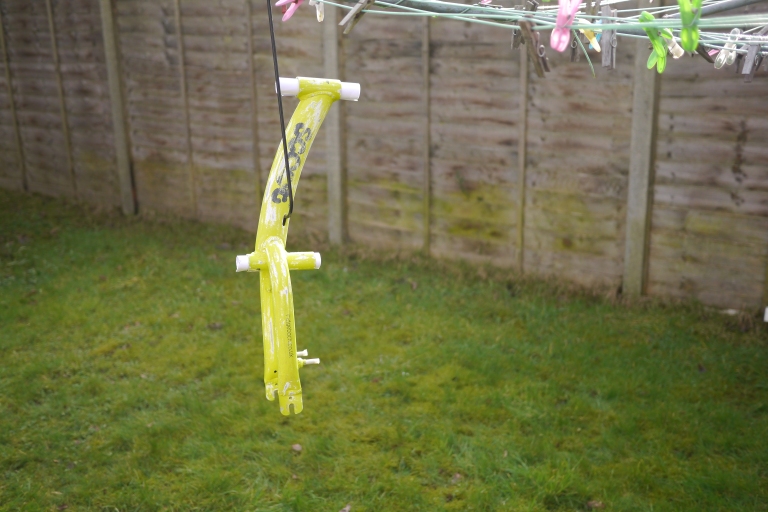 This is where we return to the point about the sander.

I’d advise that you don’t prep your frame with a sander: you can’t just uniformly skim the top coat with one of these things, because it’ll spend a while working on the harder outer coat and then eat through the primer in an instant, resulting in an uneven surface. No real surprises, let’s be honest, but worth noting. I’d get yourself some medium-fine sandpaper and give everything an even rub without disrupting the surface. (For what it’s worth, I tested the spray on a bare metal curtain pole and, unsurprisingly, it came up with a very good finish.)

I’d also bought a can of the spray-on smoothing putty. This is no doubt intended to fix the exact issues I’d created but, alas, I’d completely forgotten that I had some. I am stupid.

One coat wasn’t enough: the decals were still visible, as was the pale primer in the patches where it was exposed. Also, I’d inevitably missed a couple of bits. So I left it sitting outside, went in for lunch, and came back an hour or so later to apply a second coat.

The photos here (all taken after two coats) flatter the actual finish somewhat, thanks to the shallow depth of field. But since the flaws in the finish are pretty much all attributable to me using a sander and forgetting the putty, it’s probably not unfair. 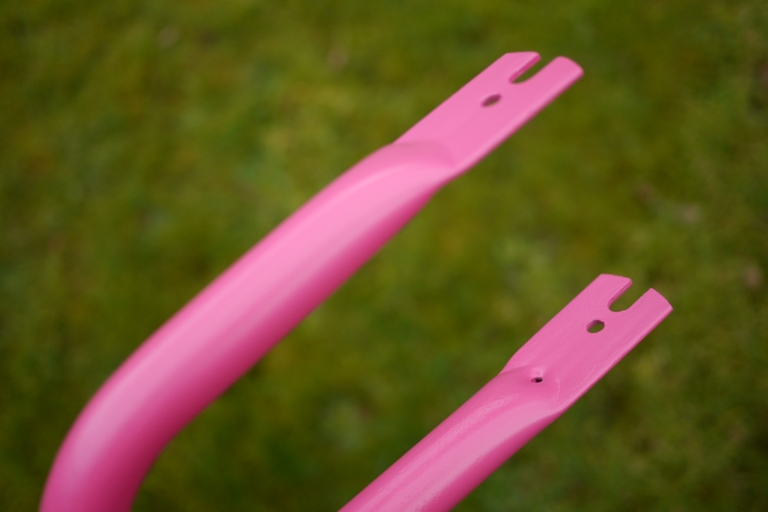 Coverage with the second coat was pretty good: opaque enough to obscure the details underneath. Perfectionists might like to apply a third, especially if you’re covering strongly contrasting graphics.

The lacquer caught me a little by surprise: I defaulted to spraying it from the same distance as the paint, but it immediately resulted in a bit of a tsunami. Back off and spray from about a foot.

I also probably didn’t wait long enough after the second coat before I applied the lacquer: initially it looked as though some of the Quasar may have been swept up in the tsunami, but it later turned out that I seemed to have got away with it with no major ill effects as far as I could tell.

It’s probably wise to apply a couple of coats of this, too: being clear, it’s hard to be sure of full coverage.

Quasar is a brighter pink than it appears online. I imagine that the fluorescent colours (they spell it “fluro”—ugh) are quite potent. In fact, the documentation suggests that they contain reflective particles, so it’s a shame that there aren’t any photos on the website of how they look when illuminated in the dark.

And, on that note, more photos of all the colours would be immensely helpful. Colour reproduction is always sort of doomed when looking at online materials (and note that I’ve not taken any care with the colour in my own photos here), but it’s a shame not to have real photographic examples of the colours to add to the patches of synthetic colour photoshopped into the marketing images.

That said, the product seems pretty good. Would I recommend doing it BikeRadar-style and simply setting to with an unprepped frame? No. At least, not unless you’re happy with a pretty grungy finish. But the amount of prep should be tolerable even for those of us who struggle to find any time around dealing with kids, and the ease of application is sufficient for pretty much anyone to pick up a can and end up with a fairly decent result. If you’d ever thought about doing your own rattlecan job and been put off by the reality of making it work, now’s your chance.

Lessons learned so far: don’t use a sander; do make sure any thicker decals are fully removed if possible; start further away when spraying the lacquer.

The next step? I’ve got to decide which of my frames to repaint, and then (when I find the time—ha!) I’m going to try a bit of stencilling. Watch this space.

I picked up the curtain pole this morning and gave it a fingernail test; the paint scraped off quite easily. I’ll give it a coat of the lacquer and see if that’s enough to protect it. (And if it’s not, I’ll try another coat.)

I rebuilt the bike (I left the brake off; from previous experience, there’s not much point on a balance bike). 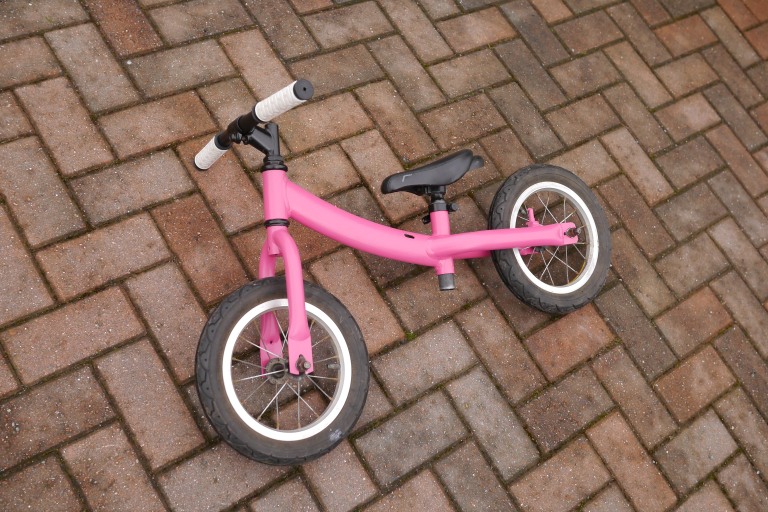 The little lady was finally keen to ride it—yay! Not that the enthusiasm lasted; she was fed up with it before she’d even made it off the driveway.

Anyway, I returned to the now-lacquered curtain pole. Again it failed the fingernail test.

Another coat of lacquer, then. And the results were still pretty much the same: easy pickings with a fingernail. I tried knocking the pole with a small aluminium carabiner on my keyring, and that disrupted the lacquer and paint as well.

So, a bit unconvincing from the durability point of view, if the curtain pole is anything to go by. We’ll see how the bike fares…